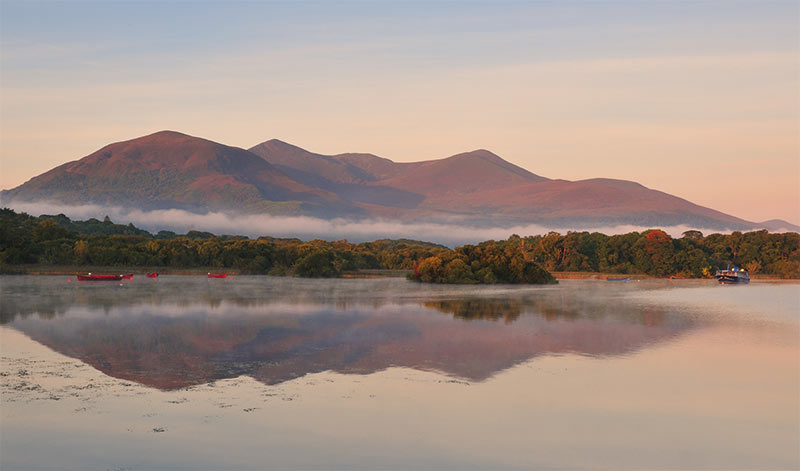 About the Lakes of Killarney Cruise

The Lily of Killarney Watercoach is docked directly in front of historic Ross Castle – a 15th century castle on the shores of Lough Leane. The crew will help you on board and you can enjoy the beautiful scenery as you wait for your cruise to begin.

During the Lakes of Killarney cruise, you will see attractions such as;

Ross Castle which is a 15th Century on the shores of Lough Leane. It was built by the local ruling clan – O’ Donoghue Ross. Over the centuries. It changed hands many times.

In 1652 Lord Muskerry and his Catholic Confederate army, came under attack from Cromwell’s General Ludlow, who had boats armed with heavy guns which they dragged up the river Laune and attacked the castle from the lake side. His “Achilles Heel” – Muskery, had little option but to surrender. This was one of the last Castles in Ireland to fall to English forces. A British Army garrison was based there until the early 1900s.

In the words of Lord Alfred Tennyson’s poem 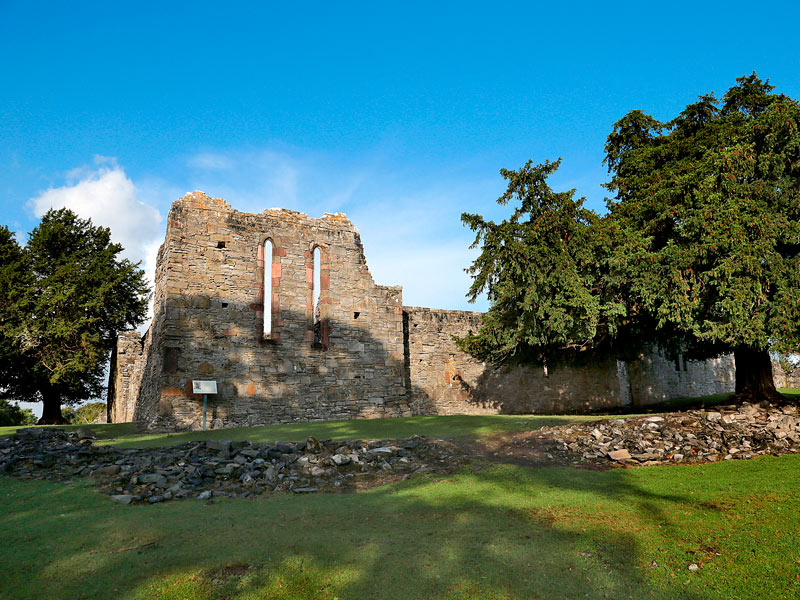 Ireland was known as the island of saints and scholars in the past, and Inis Faithleann (The Island of Faithleann) played it’s part in establishing this reputation for learning, teaching and religious devotion.

A monastery was established here by Faithleann in the 7th century and the famed ‘Annals of Inisfallen’ were compiled and completed by the resident monks over the course of a few hundred years. These booked are now in the Bodlein Library in Oxford.

It is reputed that Brian Boru, a famous high king of Ireland, received his education here.

The island has also served as a leper colony.

The deer herd in Killarney are comprised of red deer, and the smaller, Sika deer.

The Killarney Sika are Japanese in origin and, in 1865, were taken from a herd in Powerscourt, Co Wicklow that was later hybridised. The Killarney herd is now one of the purest that remains and is internationally important.

In October, we may hear the bellowing of red deer stags in rut. While red deer elsewhere in Ireland have been introduced from Scotland, recent research indicates the two Killarney herds, about 800 animals, originate in ancestors brought to Ireland by Neolithic farmers.

The remote area at Tomies Wood West was recently home to one of the first pairs of nesting eagles in Ireland in more than 100 years. Sizeable oaks are present here and there. Rhododendron colonises the stream banks beside the lake, despite attempts to eradicate it.

Beautiful club mosses and pastel green sphagnum also edge the bank. Oak begins to become the dominant species. Carpet moss grows over the rocks beneath them. 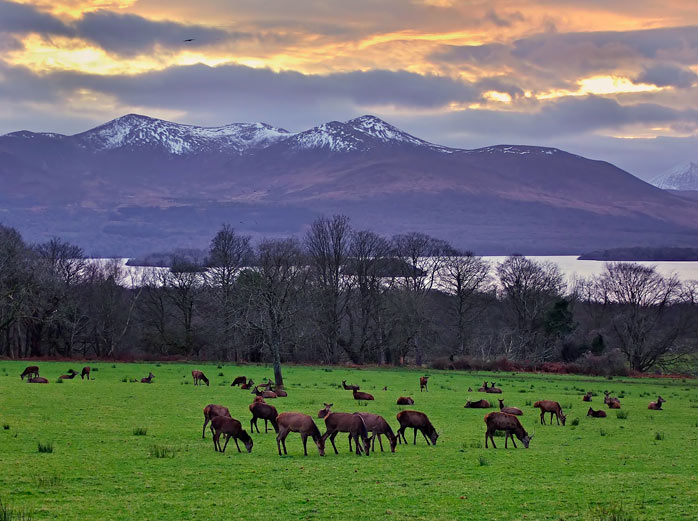 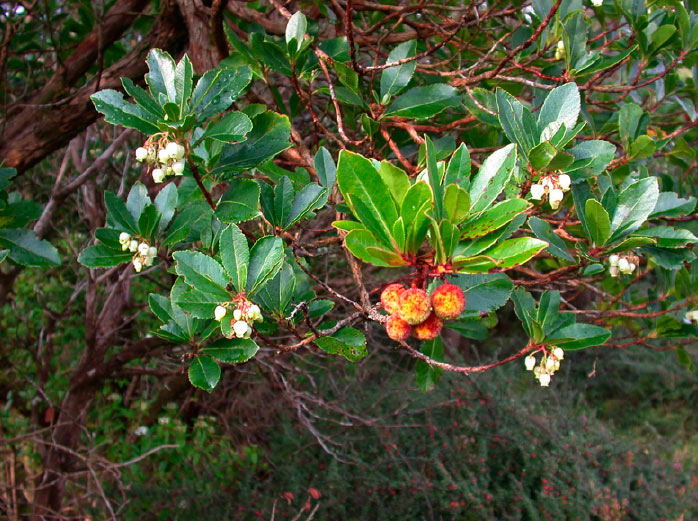 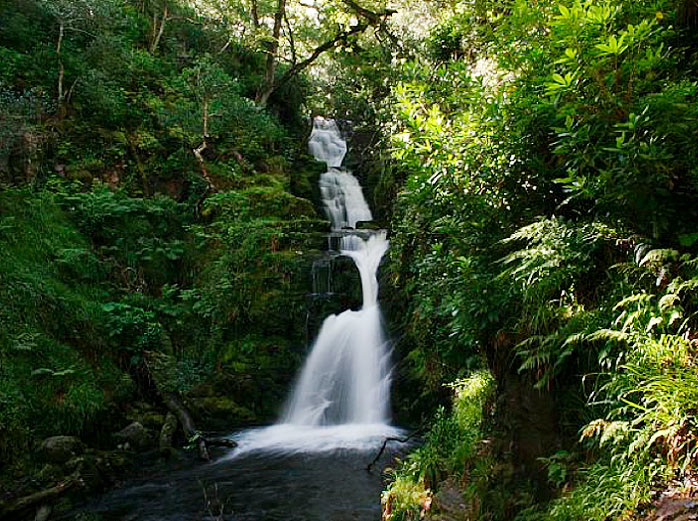 They are the earliest known copper mines in Ireland or Britain. The area was also extensively mined in the early 19th century by the Herbert family of Muckross House.

The Copper Mines are situated in a beautiful bay opening out to Lough Leane. A stony shoreline opens up on a spectacular vista of Torc and Mangerton mountains beyond the southern shores of the lake. This part of Ross Island has seen mining activity take place as far back as the Bronze Age right up until the 19th Century. If you peer over the low wall into one of the flooded mineshafts known as ‘The Blue Hole’, you will see the green hue of the water is still evident. 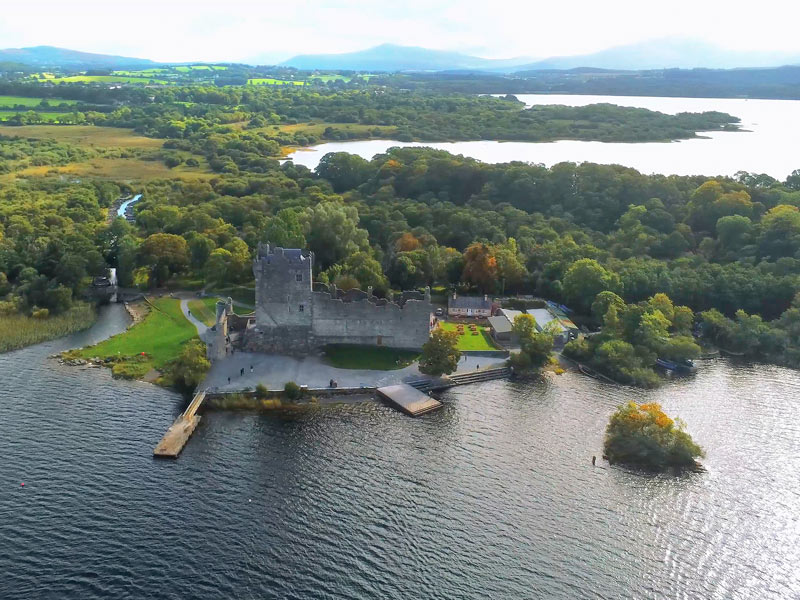 O’Sullivan’s Cascade, on the west side of Lough Leane,is a visitor attraction much-loved by the Victorians. According to legend this waterfall once ran not with water, but with whiskey instead. The Chieftain of the Fianna, Fionn MacCumhal, resided above the Cascade on Tomies Mountain. It was here that he kept his personal supply of the finest uisgebeatha (whiskey). O’Sullivan of Tomies was lucky enough to share this delightful drop, being the only man bold enough to stand up to Fionn. Unfortunately when the Sassenagh (The English) invaded Ireland, it changed into water and became known as O’Sullivan’s Cascade!

This website uses cookies to improve your experience while you navigate through the website. Out of these cookies, the cookies that are categorized as necessary are stored on your browser as they are essential for the working of basic functionalities of the website. We also use third-party cookies that help us analyze and understand how you use this website. These cookies will be stored in your browser only with your consent. You also have the option to opt-out of these cookies. But opting out of some of these cookies may have an effect on your browsing experience.
Necessary Always Enabled
Necessary cookies are absolutely essential for the website to function properly. This category only includes cookies that ensures basic functionalities and security features of the website. These cookies do not store any personal information.
Non-necessary
Any cookies that may not be particularly necessary for the website to function and is used specifically to collect user personal data via analytics, ads, other embedded contents are termed as non-necessary cookies. It is mandatory to procure user consent prior to running these cookies on your website.
SAVE & ACCEPT