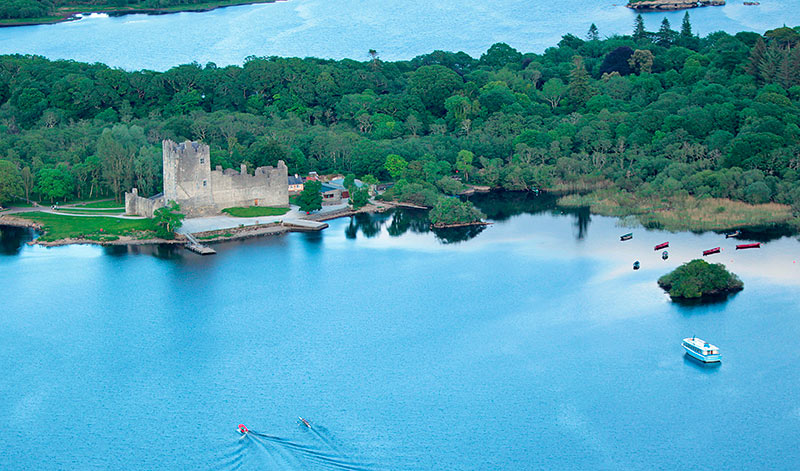 Killarney Watercoach Cruises Ltd. was set up in 1988 by a group of Killarney people involved in tourism in the town.

During the intervening years it has gone from strength to strength, becoming one of the most popular tours in Killarney.

Affectionately known as ‘The Lily’ this present boat is ‘Lily no.2’! Its predecessor was deemed to be outdated, and a brand new boat was purchased from the same builder.

It was brought by canal as far as Utrecht, where it was then picked up by the English haulage company Miller’s, and transferred onto a low loader and taken to Rotterdam. It was then shipped from Rotterdam to Imingham in England, and taken from there by road to Liverpool.

The next stage was from Liverpool to Dublin, and from Dublin down to Killarney. Its arrival caused quite a traffic jam, as two miles on the Limerick side of Adare, Co. Limerick, it had a bit of difficulty negotiating a hump-backed bridge!

It caters for people with limited time in the town, family outings i.e. First Communions, Confirmations, Hen and Stag groups, Wedding outings, Coach Tours etc. and because it is covered, and heated, it caters for all weathers.

It travels on a route, set out by the National Parks and Wildlife Service. The commentary on board is about the local area, the history and folklore of the Killarney lakes, mountains and the town of Killarney itself.

It is 19.5 metres long; 4.4 metres wide, and weighs 38 tonne. It has a crew of 2, and is licensed to carry 78 passengers. It is serviced yearly by the Dept. of Marine, and licensed by the National Parks and Wildlife Service. It was completely refurbished in 2019.

This website uses cookies to improve your experience while you navigate through the website. Out of these cookies, the cookies that are categorized as necessary are stored on your browser as they are essential for the working of basic functionalities of the website. We also use third-party cookies that help us analyze and understand how you use this website. These cookies will be stored in your browser only with your consent. You also have the option to opt-out of these cookies. But opting out of some of these cookies may have an effect on your browsing experience.
Necessary Always Enabled
Necessary cookies are absolutely essential for the website to function properly. This category only includes cookies that ensures basic functionalities and security features of the website. These cookies do not store any personal information.
Non-necessary
Any cookies that may not be particularly necessary for the website to function and is used specifically to collect user personal data via analytics, ads, other embedded contents are termed as non-necessary cookies. It is mandatory to procure user consent prior to running these cookies on your website.
SAVE & ACCEPT